How to Create a Swap File on Linux

Add swap space to a Linux computer, or increase the swap space that’s already present, without messing about with partitions. We show you the easy way to tailor your swap space.

There are several scenarios where you might want to increase existing or add new swap space to your Linux computer.

The simple solution to all of these is to add a swap file to your computer. This is a special file, pre-allocated and reserved for use as swap space. A swap file will work in tandem with any existing swap you may have, whether that is a swap file or a swap partition.

At one time, there was a performance hit for using a swap file compared to a swap partition. That’s no longer the case with improvements in the performance of mechanical (spinning) hard drives and more efficiency in the swap functions within the Linux operating system. In fact, some Linux distributions now default to creating swap files rather than swap partitions.

Swap isn’t just used as a means to free up RAM when you’re running low on memory. It’s an important part of a well functioning system. Without any swap, sane memory management becomes very difficult for the kernel to achieve. Let’s look at the easy way to add some swap space.

Before We Dive In: Btrfs and SSDs

There are two points we’d like to discuss quickly.

The Btrfs file system has certain caveats about swap files. At one time, there was a conflict between the copy-on-write nature of Btrfs, which wanted to operate in one way and swap files that needed to operate in another. Some functions that swap files depend on were not implemented, and some assumptions that were made about block numbering within the swap files did not hold true with Btrfs. So swap files were not supported.

Since kernel 5.0, you can have swap files in Btrfs file systems if they are set up with the following requirements:

Most readers will be using the default ext4 file system, so this won’t be a concern to them.

RELATED: Which Linux File System Should You Use?

When Solid-State Drives (SSDs) were first available, there was a concern about using them in situations that had frequent file system writes. People were warned off from putting swap space on SSDs, and even to avoid system logging to SSDs.

This is much less of a concern nowadays, and many SSDs that are on sale have life expectancies that will outlast most PCs. A swap file on an SSD will have a far better performance than a swap partition on a mechanical hard drive.

Look before you leap. Let’s check what swap space is available on your computer. You can do this two ways, and we’ll use both. The free command will display the used and free memory. The -h (human readable) option will cause free to use sensible units when it displays the memory values.

The output from free shows that there is no swap space configured on this machine.

Swap is never discussed without RAM and free RAM cropping up. So it’s worth noting that the free RAM is given as 237 MB. Don’t mistake that for the total of RAM available for use. That value is provided by the “available” figure, which is 881 MB.

Linux uses free RAM for its own purposes, such as file caching and kernel buffers. The amount of RAM dedicated to that is the “buff/cache” figure, which is 871 MB. But that memory is still regarded as—and counted as—“available.” The contents of the “buf/cache” RAM can be discarded immediately and used by any application that needs some memory.

Another way to check if swap space is available is to use the swapon command. The --show option doesn’t make any changes to the swap on your computer. It only provides statistics.

If there is no output from this command, there’s no swap configured.

How Much Swap Space Do I Need?

The traditional response was “twice the amount of RAM you have.” But this was coined when computers used to have very limited RAM. As RAM has become cheaper, and programs and games more demanding of memory, PC specifications have adjusted accordingly. Home PCs with 32 GB of RAM are not uncommon nowadays. And you’re not going to allocate 64 GB of hard drive space to swap space if you’ve got 32 GB of RAM. That’s plainly excessive.

The amount of swap you need is as an incendiary subject, comparable to “which is the best editor.” One of the most sensible discussions we’ve seen on this topic is in the Ubuntu swap FAQ. It’s a short and commonsense approach (although, like many people, they misunderstand how swappiness works on Linux). There’s a handy table that shows a recommended amount of swap space for the amount of RAM your system has, and whether you hibernate your computer or not.

And the good news is, it doesn’t really matter what value you pick. We can always remove a swap file and replace it with a bigger one or, for that matter, a smaller one. Or you could just add another swap file.

Pick a swap file size from the table, and run it for a while. Monitor your system’s use of the swap space. If fine-tuning is required, changes are easily made. With swap files, It’s a two-minute job. Compare that to adjusting partitions on a live Linux computer.

RELATED: What Is Swappiness on Linux? (and How to Change It)

You shouldn’t use the fallocate command to create your swapfile. This is from the man page for swapon:

So, although fallocate is faster, we’ll use dd to create the swap file. The machine used to research this article has two GB of RAM. We’re going to create a one GB swap file.

Some statistics are provided when the file is created.

We can see the number of blocks (records) that were written to the file, the size of the file, the time taken to create the file, and the effective data transfer rate.

Use the ls command to see the file in the root directory:

We need to prepare the swap file with the mkswap command before it can be used. We don’t need to provide any parameters to mkswap other than the path and name of the file:

The file is prepared for use as a swap file. Note the warning about file permissions. We’ll need to change those so that the root user is the only one who can read and write to the swap file.

The default permissions are too liberal, we need to restrict them so that only root can use the swapfile. Use chmod to change the file permissions:

This removes all permissions from the file group members and others, but allows the file owner, root, to read and write to the file.

RELATED: How to Use the chmod Command on Linux

We need to use the swapon command to let Linux know there is a new swap file available to use. We only need to provide the path and the filename:

The swap file is now active.

Adding the Swap File to fstab

To make sure your swap file is available after a reboot, add it to the /etc/fstab file. You can use any text editor you prefer, but we’ll show the process using the graphical Gedit text editor.

The line we need to add to the bottom of the file is:

Save the changes and close the editor.

RELATED: How to Write an fstab File on Linux

To see if your swap space is being used, use the swapon command with the --show option:

If more than one swap space has the same priority they are used alternately until they are both full, then the system looks for the swap space with the next lowest priority. If you only have a single swap space then the priority is irrelevant of course. But we’ll change the priority of the swapfile we’ve created to demonstrate how to do it.

To set a priority, add the  pri=  (priority) option to the /etc/fstab entry. Edit the line you added to /etc/fstab to look like this:

That is, add pri=10 to the options field, separated from the “sw” with a comma. Do not leave any spaces between the “sw”, the comma, and the “pri=10.” Reboot your computer and use the swapon --show command:

The priority of this swap space has been elevated to 10. Which is proof positive that the options field in the /etc/fstab entry is not ignored.

Cutting through the exposition and explanation, we can create a new swap file as easily and quickly as this:

And let’s check that it worked: 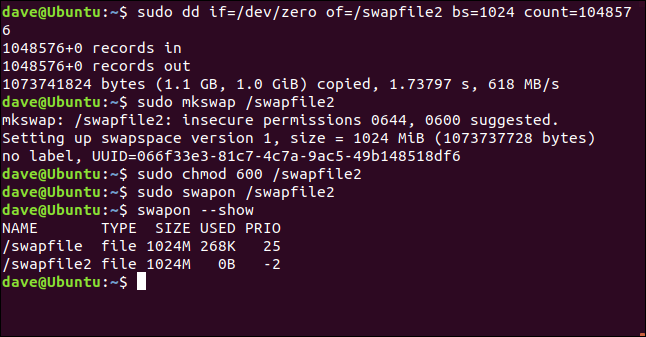 If you want to make that permanent drop, it into your /etc/fstab file.